One-fifth of the Beaver River is located in Brown’s Tract, Herkimer County, NY. Brown’s Tract was named for John Brown of Providence, RI, who acquired nearly 200,000 acres of land in upstate NY in 1798 in a wilderness eventually referred to as the Adirondack Mountains.

The “Guilded Age” of the Adirondacks were from 1875 to 1910 when the region was at the height of its popularity. By 1900, a quarter of a million people were coming to the mountain resorts during the short summers before the automobile brought significant changes.

Beginning in 1872, Verplanck Colvin, an Albany lawyer, began the first scientific survey of the Adirondacks for the State of NY. In 1883, the State Legislature passed a law withdrawing all State land from further sale and began to buy up additional land. The Adirondack Forest Preserve was founded in 1885, and the State passed the Article VII “Forever Wild” amendment in 1894 forbidding the selling or leasing or taking of timber that stood on State land. This clause was highly controversial at the time, and did not completely eliminate harvesting timber on state land, especially preceding flooding for reservoirs or following blowdowns.

The Beaver River begins in Lake Lila (formerly Smith Lake) in the northeastern corner of Hamilton County and flows westward to join the Black River at Naumburg. The Black River canal was created in 1851 and caused immediate problems along the Black River itself. Mill operators at Forestport brought suit against the State, which resulted in the building of storage reservoirs upstream on the Black River and the Moose River. The Old Forge dam flooded great sections of the Moose River creating what is known today as the Fulton Chain of Lakes.

The combined capacity of the reservoirs was insufficient and in 1885, an additional dam was built in Stillwater on the Beaver River. It was rather low and primitive and flooded only a small area of swampland. In 1894, it was raised five feet and is so maintained. 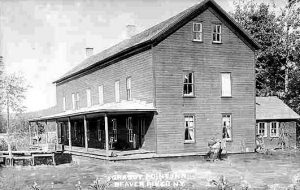 Dr. Webb of Nehasane had operated an expensive lumber operation throughout the region. When the dam was raised, he brought suit against the State since the flooding prevented floating the logs down the Beaver River. Accordingly, the State purchased 75,000 acres of his timber (ca. 1895-1896) and this marked the beginning of the State’s acquisition of Dr. Webb’s large holdings.

In 1922, the Black River Regulating District took over the supervision of the water storage operations and work began to raise the Stillwater Dam 19 feet. This resulted in flooding nearly 4,000 acres of forestland, and the raising of a mile and one-half of the railroad bed. The original two floodings had been done without the removal of any timber. The trees died and presented a desolate appearance. In the course of time, they fell and sank to the bottom. Prior to the 1922 flooding, all the new flow land was cleared of timber and old stumps were cut to within 12″ of the ground whenever possible. Camp properties to be flooded were purchased by the Regulating District or moved or exchange for property on higher ground.

The Railroad
The thirteen mile “Brown’s Tract Road” ran from near Boonville (Moose River Settlement – sic) to the Fulton Chain and served for over seventy-five years as the forerunner of the railroad. In 1892, Dr. William Seward Webb completed his Adirondack and St. Lawrence Railroad (Mohawk and Malone – sic) which ran through Beaver River. Dr. Webb’s holdings included all land adjacent to Second, Third, Fourth, Rondaxe, Darts, Cascade, Moss, and much of Big Moose and Twitchell Lakes, Stillwater and the Beaver River.

He began disposing of his properties in 1893 until 1902 except for a private preserve of approx. 70,000 acres called Nehasane Park. By 1912, there were thirty-one official stops on the line, which he had sold to the New York Central in 1893 with spurs in Old Forge, Raquette Lake and Clearwater (Carter Station). Dr. Webb died in 1926 at his home in Vermont. His memory is perpetuated by the Town of Webb, so named at the time of its incorporation in 1896 when the Town of Wilmurt in Herkimer County was divided up. 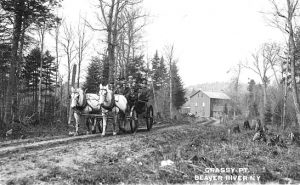 Beaver River – The Community
In 1893, Dr. Webb began to deed the greater part of his land back to the State with certain exceptions; his Nehasane property, Beaver River, Stillwater, and Twitchell Lake. Why was the stop at Beaver River Station established in the first place? It was logical for Dr. Webb to consider a junction of his railroad in an area already popular with hunters and fishermen. To support the station’s traffic, the surrounding tract was reserved for private property upon which hotels, boarding houses and hunting lodges could be built. In the early part of the 20th Century, Beaver River became a lively place. In 1901, the largest shipment of game at any point on the line left Beaver River, 91 carcasses, 5 saddles and 10 heads. It is impossible to determine whether or not the area was inhabited to any extent prior to the founding of the Beaver River Railroad station. Squatting was common in those days in the Adirondacks, yet we find little published material concerning our little no-man’s-land. Since the conformation of Beaver River is a perfect six-tenths of a mile square, we know it’s act of establishment to have been very deliberate. So Beaver River dates from 1893, a comparatively young community as Adirondack developments go.

Dr. Webb held this newly formed square of private property surrounded on all sides by State land for only six years. In 1899, he sold the entire block to one Firman Ouderdirk, who in turn retained the land for only three years. (Note: extensive logging began during this time). It was then sold to B. B. Bullock whose name still stands out, cast on the front of the Norridgewock cash register behind the bar. Bullock was better know as Bert and from then on, the land was known as the “Bert Bullock Block” in subsequent land deeds.

Bert’s father “Pop” Bullock built and operated a boarding house type hotel at Grassy Point and Bert, in 1902 started to build the first Norridgewock Hotel, a large three story, typically Victorian wooden structure with the usual wide porch. The Annex or UBRCC now stands on the site and the original sidewalk from the railroad right-of-way to the front porch, still exists. Social life around Beaver River centered around the Norridgewock and eating and drinking and card parties, planned and impromptu were the order of the days and nights. There was a large community room available for all sorts of festivities. The first Norridgewock burned on May 18, 1914. Bert Bullock had suffered an irreparable loss financially and began selling off his land east and west of the tracts in 1915-1917.

Beaver River Schools
The Marcantonio log cabin, built by a man call Lee, now barely visible from the tracks on the west side, is possibly the oldest building in Beaver River. It was the first schoolhouse in the area and when it was no longer available, a schoolhouse was built on the opposite side of the tracks (built by Bullock in 1912. See School Board notes) and is now owned and occupied by Bill and Betty Partridge. Most of the Partridge offspring and the children of Clint and Walter Thompson (eventual Norridgewock owners) were taught there. Also, children from Brandreth and Nehasane commuted daily to attend. There were many teachers in the one-room schoolhouse including Helen Fallon, of Old Forge, Harriet Purdy, Mrs. Sparasine, Mary Puffer and Nellie Rielly. In 1927, Mrs. Hurley, Howard Hurley’s mother, taught school and for a period of time so did Lucille Thompson, Stan’s sister as well as Bill Partridge’s sister Dorothy. By 1958, there were only the Thompson children in attendance, and the Town refused to provide a teacher. Pat Thompson taught her own children from 1959-1965 using the Calvert Course prepared by the University of Maryland – used nationally on all Army Posts. At one time, Beaver River had the smallest school in the nation, one teacher and three children. In 1965, the school closed for good.

The Stillwater Reservoir has been enlarged on a number of occasions for the harvest of lumber in the surrounding area. The last expansion occured in 1923. However, several expansions occured prior to that date. In 1893, the State of New York passed an Act to restore the road from Stillwater to Beaver River along the old Carthage to Champlain Road (now the 6 Mile Road). It is likely that this act was passed in preparation for the expansion of the reservoir that occured in 1894. Here is the text of the Act.

An Act to restore, by constructing bridges, the Lake Champlain and Carthage road, rendered impassable by reason of that sete dam being build at Stillwater, on the Beaver river, and making an appropriation therefor.

The People of the State of New York, represented in Senate and Assembly, do enact as follows:

Section 1. The superintendent of public works, in accordance with the plans and specifications to be prepared therefor by the bridges state engineer and surveyor, is hereby authorized to construct, in permanent form, such bridges over Twitchell creek and the flow of water, caused by the building of the state dam at Stillwater on the Beaver river, which said flow obstructs and renders impassable the Lake Champlain and Carthage highway, as may be necessary to restore said highway and the former usefulness thereof for the convenient passage of teams and vehicles thereover, between Beaver river station and Stillwater.

§ 2. The sum of five thousand dollars, or so much thereof as is necessary, is hereby appropriated from the moneys in the treasury not otherwise appropriated, to carry out the object and purpose of this act, to be paid by the state treasurer upon warrants drawn by the state comptroller, to the order of the superintendent of public works.

§ 3. This act shall take effect immediately.